In 2011, emo pop/punk wunderkinds, Mayday Parade, released a self-titled album that would go on to be one of their best-selling and most memorable LPs. With that album, the band gave us the classic track, “Oh Well, Oh Well.”

Ten years later, Mayday Parade decided to celebrate that seminal record release with a tour playing the record’s hits for the fans and sharing the stage with the likes of bands, Real Friends and Magnolia Park.

I headed out to one of my favorite venues in Philadelphia, Union Transfer. This old 1800s Farmers Market-turned-music venue still has that solid 19th-century wooden architecture intact on the inside as well as chandeliers of the period hanging from the tall ceiling. It always provides a uniquely vintage backdrop to whatever live act is performing and I can also confidently attest to the fact that, acoustically, there is not a bad seat or even a bad vantage point in the house.

The first to take the stage was Magnolia Park. So a bit of a backstory. In February, my oldest daughter came down to my office, and said, “I have a band I want you to hear. I found them on TikTok.” Lead vocalist, Joshua Roberts, stayed in constant motion as if being propelled by landmines from point to point, on stage. Playing viral hits like “Sick of it All,” “Back on My Bullshit,” and “10 For 10,” the crowd was energized and in the palm of their collective hands.

Real Friends was the second to perform and I got the biggest ringing endorsement of this band from fans right on the floor. In between Magnolia Park and the Real Friends sets, I began talking to a couple that was equally blown away by Magnolia Park. These two random would-be music historians were filled with excitement about Real Friends, comparing them to some of the biggest names in punk and hardcore. Names like Black Flag and the Descendants. If these two individuals are not part of the Real Friends PR team, they should be. They had me so excited to see this band, I was actually mad at myself for not being in the know, before. To that, Real Friends ripped into songs like “Me First, Nervous Wreck” and “From the Outside.” I felt like I was wearing my Santa Cruz Skateboards Corey O’Brien t-shirt while reading Thrasher Magazine and listening to kickass hardcore punk once more. It’s amazing how closely music can take you back to an exact time and location in your life and Real Friends did just that.

Finally, Mayday Parade arrived and gave the audience the entirety of their album, A Lesson in Romantics, which was celebrating its 15th anniversary. Every track was performed in chronological order from “Jamie All Over,” “If You Wanted a Song Written About You All You Had To Do Was Ask,” “Take This Heart and You Be the Anchor…,” from start to finish. They even encored with a snippet of “My Hero” in honor of Taylor Hawkins of the Foo Fighters. The set wrapped up with “Oh Well, Oh Well” and a gracious bow out before the lights lit back up Union Transfer.

I’m compelled to first address the fact that there was not a fair-weather fan to be seen in that venue. Every single person from the balconies to the front row came for Mayday Parade. They knew every word to every Mayday Parade song and they came to the party with Mayday Parade. The sheer static electricity from everyone’s excitement on that floor was enough to charge an iPad. That crowd was an essential piece of the success of that show and lead vocalist, Derek Sanders, knew that and was a kind-spoken tour guide through it all. He brought the fans in and the audience claimed the show as a result. It is always like watching a miracle take place when I witness people of all walks of life, united in being a part of a musical experience that moves all of them equally. That is something I will always remember about this show.

The greatest takeaway for me, however, will be getting to say that “I was there” when Magnolia Park broke. Mark my words, they are going to be the future of pop-punk. 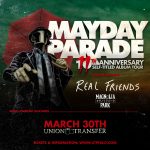