In 2012, Gable Music Ventures was asked to organize a block party in the center of the city on the Thursday night leading into the Firefly Music Festival out in Dover.  It was dubbed The Ladybug Music Festival and featured a bill of all female artists.  The goal was to create a vibe similar to Austin and Nashville where for just one night, music lovers could wander in and out of local businesses along the block and see/hear different performers with a variety of styles.  According to Downtown Visions, the inaugural event drew 1,500+ folks.

The 2015 Ladybug Music Festival was held on July 16th and featured thirty-five local, regional and national acts on nine stages.  Attendance was estimated at 3,000 +/-, and that number may be conservative.  It was rocking door to door, stage to stage and all along the street.

I spoke with Jeremy Hebbel and Gayle Apuzzo Dillman of Gable about their impressions.  Hebbel asked, “Did you notice how many people with disabilities were there?  We are very proud of how accessible Ladybug is.”  Indeed it was.  In fact, I remarked how diverse the audience was in general.  The carefully selected variety of artists ensured a wide range of musical styles from Rock, Funk, Singer-Songwriter, Avant Garde, Experimental,  Jazz and carefully crafted over the top intelligent humor (Hot Breakfast!).   This concept exposed new artists to new listeners.  It was clearly great for the local businesses, too.  Word was that most restaurants and food concessions ran out by 9:00 PM!

Why Thursday night?  Dillman explained that in the summer, Folks run to the beaches on Fridays.  This allows the greatest quantity of area residents to enjoy a wonderful evening to get the weekend started early.  Mission accomplished! 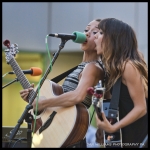 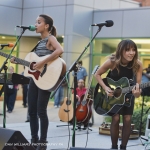