For me, Saturday night’s sold-out show at Union Transfer was like paging through someone else’s photo album. (They still have those, right?) As I watched Philly’s Beach Slang bask in the warmth of a hometown show and listened to Cursive emotionally perform their hit album The Ugly Organ, I recognized all the familiar benchmarks of growing up, but because they weren’t my memories, I could only appreciate the moments at arm’s length. In other words, I was witnessing someone else’s nostalgia.

Beach Slang is a band that has deep roots in the Pennsylvania music scene. Lead singer James Snyder is known best around these parts as the frontman for ’90s pop-punk band Weston, which rumbled down from Bethlehem two decades ago to shake up the Philly ’burbs. Now, matched up with bassist Ed McNulty (NONA) and drummer JP Flexner (Ex-Friends), Snyder is channeling those early influences and experiences into a sound ready-made for modern ears. The energy was high, and Snyder was giddy as a schoolgirl throughout Beach Slang’s terrific set, playing almost all of the songs from their two 2014 EPs, Cheap Thrills on Dead End Street and Who Would Ever Want Anything So Broken? Songs like “American Girls and French Kisses” and “Punk or Lust” nail that reverb-heavy guitar sound, and Snyder rasps into the microphone like Richard Butler of The Psychedelic Furs. Something is clearly working here.

Snyder is quick to embrace his nineties-era influences. After borrowing trumpet player Patrick from tourmates Cursive, Beach Slang played a heartfelt rendition of The Replacements’ “Can’t Hardly Wait”, which brought the crowd to full throat. Later in the set, “Game of Pricks” by Guided by Voices made an appearance, a song Snyder said he wishes he wrote.

While the set lost a little momentum with extended stage banter down the stretch, it was nice to see the band clearly excited while interacting with friends in the audience. When Snyder’s smiling face briefly emerged from behind his wild hair, red with exertion and alcohol, I could tell he was having a good night. There should be plenty more of those to come, so make sure to follow Beach Slang as they work on their next project. Cursive was always a band I heard my friends talk about but never gave a proper listen to. I always thought they were harder than they are, and didn’t realize how much they experimented with their sound throughout their career. The one thing I did know, though, was that 2003’s The Ugly Organ was a huge hit, and with the band touring in support of the remastered deluxe edition, everyone who did listen to the band in their teens and twenties showed up and freaked out Saturday night.

Cursive did play all of The Ugly Organ, but interspersed songs from the rest of their catalogue throughout the set, putting an interesting spin on the recent whole-album concert trend. Tim Kasher proved an adept frontman, animated while delivering his high-concept lyrics yet retreating to give other members the spotlight when appropriate. Without sharing the same emotional connection to the songs as many of my fellow concertgoers, I was most captivated by the stirring low end created by Matt Maginn’s bass and guest Ellen Lind’s cello. Obviously it’s a signature sound for that album, and really made the performance. John Congleton and The Nighty Nite opened the show, and while I admired his passion, the room was just a little too big for his sparse, emotional songs. Even with extra layering effects on the keyboard and vocals, it was hard to connect with the performance.

Although I didn’t experience the same emotional release as longtime Cursive fans Saturday night, I definitely enjoyed the performance, and the real proof of success was in the enthusiasm of the crowd. I did feel an immediate connection with Beach Slang’s music, and look forward to hearing and seeing more of them soon. The Ugly Organ tour hits New York this week and concludes in Cursive’s home state of Nebraska on March 22. 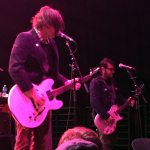 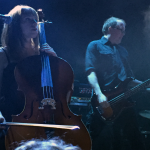 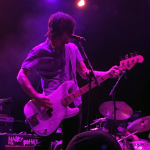