Judith Hill: In The Round 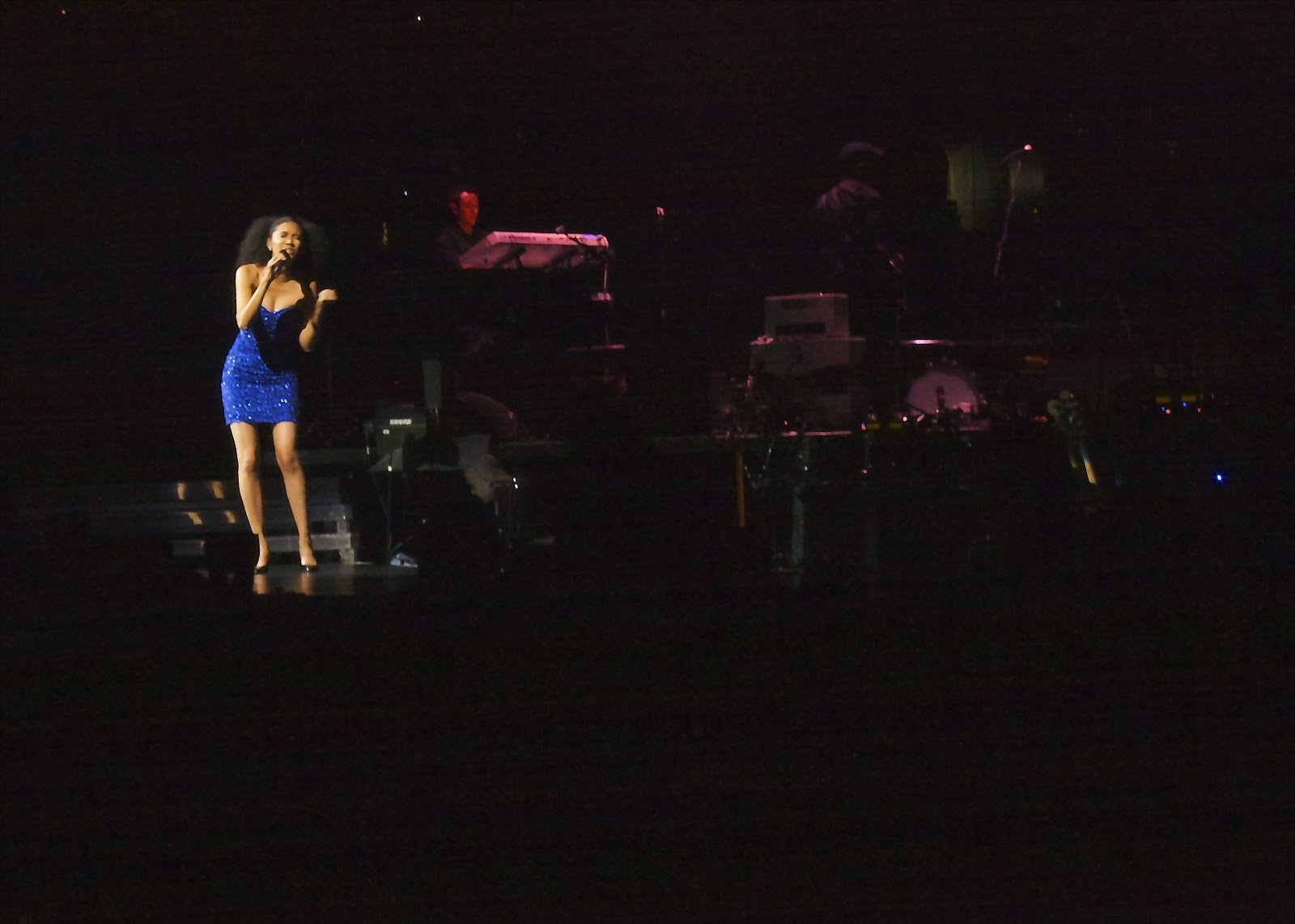 (Photos and story by Julianne Cassidy)

“I hate this Country.” In a raw, spur-of-the-moment, unfiltered mutter, Season 4 coach, Adam Levine, extemporaneously summed up the disadvantage of being a contestant on reality television singing competition, sometimes the best does not win. On May 28, 2013, Top 8 contestant, Judith Hill, was eliminated from “Team Adam” after a nationwide vote. America… you were wrong.

Best known for being hand-selected by Michael Jackson, as his debut partner for “I Just Can’t Stop Loving You,” and backup vocalist for his international comeback “This Is It” tour, Hill subsequently closed the all-star memorial for Michael Jackson with “Heal The World,” backed by Jackson’s friends and family. Although Hill had received no mention in the handouts at the Staples Center that day, nor did she become “The Voice,” Hill has a voice, and her voice will not be silenced any longer.

Five months since her television dismissal, after being featured in the documentary-film 20 Feet From Stardom, Hill is now signed with Sony Records and opening for multi-platinum singer-songwriter and actor, Josh Groban’s “In The Round” North American-tour. With five shows left, Hill and Groban visited Philadelphia’s Wells Fargo Center this past Sunday, November 13th. And every “Groban-cult-lovin’” middle-aged woman or grandma left knowing Hill’s name.

With a respectful nod to a gorgeous sampling of her The Voice performances, Hill began her set at a piano with a soul-aching medley of covers: “Feeling Good” by Nina Simone and Carole Kings’ “You’ve Got a Friend.” Properly placed in between, intertwining the lyrics together was “I’ll Be There” by The Jackson 5. A sweet and subtle tribute by a protégé missing her mentor, yet performing just as resolutely as his meticulous-talent would.

“Beautiful Life” thus invited the audience into Hill’s personal repertoire, as it’s featured on the Red Hook Summer soundtrack, the sixth film of Spike Lee’s “Chronicles of Brooklyn” series. Each words hung heavy in the “cavernous” arena [as Groban would later described the venue], as I couldn’t help but compare the lyrics to Jackson, “bright eyes and a smiling face, they all said you would fly to the stars;” there was just something magic in her attractive musicality.

Standing up from her piano, Hill alleviated the mood with the romantic “Harder You Fall.” Gently loosening up the stoic crowd, she leisurely circled the 360 degree stage, as her background singers snapped, and she charmingly clapped along to the Jazzy-inspirited melody.

“Love Trip,” followed by “Abracadabra,” brought Hill’s infectious energy to a climax, as a brighter light display of yellows and hot pink followed suit. Once detached patrons, who quietly watched Hill with wary-intent, now couldn’t help but clap along as Hill danced around the circular-stage with her band one after another in unison.  Hill, placed in between two guitarist and two backup vocalists, did subtle choreographed moves, in syncopation with the lyrics and symphonic pulse. “Abracadabra” featured the two vocalists grabbing bright green French Horn-shaped toys for dramatic “solos.” There was also an instrumental section between both songs, as a royal blue spotlight reverberated to a club-beat prelude.

“Till The End” stilled the pace again, uniquely apparent as the intense love ballad of Hill’s set. Both backing vocalist stood across from each other, mirroring each move, shadowed in a deep purple hue, as Hill poured her whole heart out on the stage, angelic in a bright white spotlight. Every sequin radiated on her vibrant blue form-fitted strapless mini-dress, as did the glitter shimmer on her eyelids.

Reminiscent of a Gospel-fueled call and response, Hill reprised “Beautiful Life,” as her closing number. Starry-eyed, yet fierce, her vocals were notes of compelling conviction. And with a modest, “thank you,” she humbly exited the round.

Robust in theatrical-performance, with the stage decked in damask-print banners and lit-spheres suspending midair, headliner and Popera megastar Groban took to the stage much more demanding, than that of Hill. With musicians placed on various lower level stairs, they each paraded to the stage after their respected solo, for Groban to then bombastically join onstage, with one of his more contemporary-rhythmic tracks, “Brave”, his lead single from his most recent sixth-studio album, All That Echoes.

Casual in a sports-coat and jeans, with a plain-white-tee underneath, Groban easily jumped language barriers for such melodramatic vocal feats as: “Un Alma Mas” performed in Spanish, and “Alla Luce Del Sol” in Italian. Groban not only showed off his vast language expertise, but also his instrumental dexterity, by commanding the piano for “February Song,” and drums for “Voce Existe Em Mon.” Oh, and he squeezed in a little “Baby, Baby, Baby… Ima-marry-you-girl” Bieleber moment too. The 16-song, almost 2-hour set, showcased that he is in fact, a baritone-man of many talents.

In moments of unabashed jokes with the audience, after manly catcalls: “pure masculine energy here tonight ‘In The Round’… you paid for your whole seat, but you only use the edge,” noting his loss of innocence after a sloppy kiss from the Philly Phanatic (with that “thing that comes out of his mouth,”) and an attempt to hit-on himself via the four double-sided jumbotrons above stage: “woah, hello, hey handsome… that is the douchiest thing that I’ve done on this tour,” it is clear that Groban is a charming goofball. Likewise, he followed the same engaging persona halfway into the show with a three-question audience Q&A: which covered such topics as: trading piano tips with sweet 9 year-old Ava O’Sullivan, and assuring his bandmates that “size does matter”… in regards to microphone-sizes, that is. O’Sullivan was supposed to cover her ears for that part. 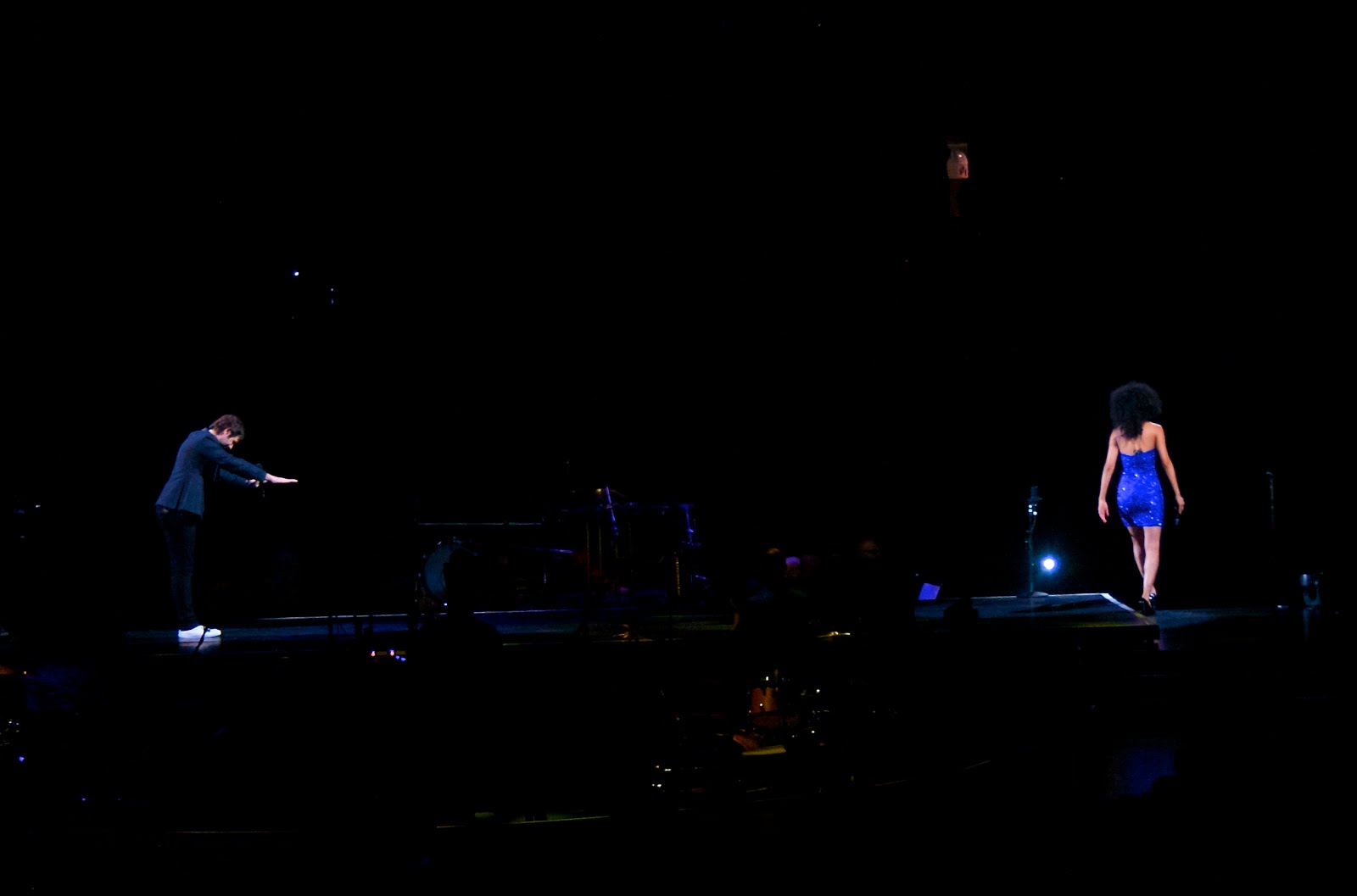 Hill joined Groban for two awe-inspiring duets, his 2004 hit, “Remember When It Rained,” and “The Prayer,” first-famed by Celine Dion and Andrea Bocelli in 1999. With a 15-person orchestra including backup vocalists, Hill and Groban were effortlessly magnetic. Fusing the show full circle, it was difficult to not be consumed with pure emotion.

Hill, who played her first show in Philadelphia that night, was electric. She had herself to prove to a devout audience who’s staunchly supported Groban’s 25 million records-span of a career since 2001, and she did it. While Groban encored his 2004 #1 smash, “You Raise Me Up,” followed by Charlie Caplin’s “Smile,” I was not-so-patiently waiting for an impromptu encore by Hill. She’s just that good.

Hill will be returning to our tristate next month, on Tuesday, December 17th, at World Café Live at The Queen, in Wilmington, DE. Tickets are ONSALE now.

This is your second chance, America… take it.